For about thirty years during the last century, exposure meters manufactured by the Weston Electric Instrument Corporation were the first choice of both amateur and professional photographers here in the United States. Unfortunately, because Weston was unable to survive the arrival of more modern battery powered meters, the company went out of business some time during the 1970s.
But if you're a Weston lover like me, you can take heart in the fact that many of these beautifully crafted, selenium powered units are available on the Internet and elsewhere. The trick is to find one that hasn't been abused and still measures light reliably. 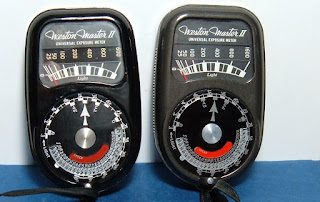 I was lucky when I found not one, but two of these wonderful instruments at an auction site. After I received them, the first thing I did was to test them for accuracy.
I did this by pointing them at a clear north sky between 10:00 AM and 2:00 PM. Imagine my surprise when I found that the needles on both units pointed to the number 320 at the exact centers of the two dials. This proved that the units were accurate. Surely, I thought, the Goddess of Light must have been smiling at me. 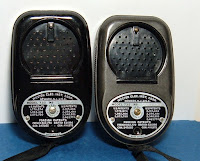 The photo at the left shows the reverse side of the units with their light baffles closed. These baffles remain closed while you aim them at a scene to take a light reading of a bright or normal scene. 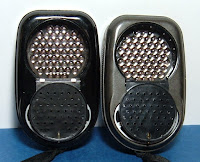 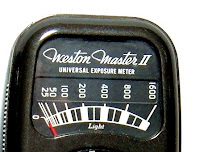 The photo on the left shows the numbers that appear when you're reading a normal or bright scene with the baffles closed.
On the right you will see the numbers that appear automatically when the baffles are lowered for low light readings. Note that although the Weston meter was designed primarily for use in bright or normal lighting situations, it can still be effective in low light situations. 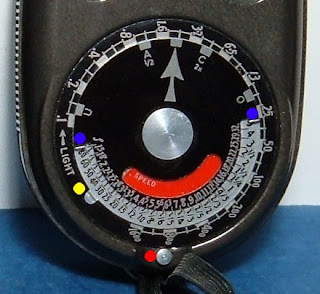 The dial on the Weston II (and other Weston meters) is actually a kind of mechanical computer. To set the speed of the film you're using, press the button near the red dot I placed there for illustration and, using the tab near the yellow dot, turn the silver colored dial until the number you've selected appears in a little window next to the word SPEED. Note that the numbers (.3-800) are Weston numbers that you must convert to ASA/ISO numbers. Fortunately, conversion charts are readily available on the Internet.
Then you use the tabs next to the blue dots to align the arrow with the number that corresponds to the number shown on the dial after you aim the unit at the scene you're photographing. 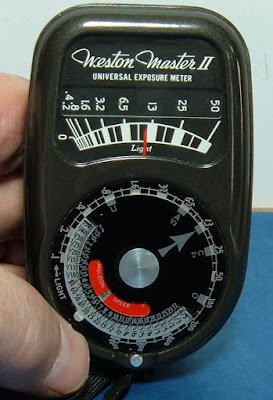 In the example shown here, with the film speed set at Weston 80 (ASA/ISO 100) and the red needle pointing to 13 (or close to it), the white arrow is set to 13.
The black numbers on the silver dial show all the possible shutter speeds when they are matched to the white numbers that face them on the black dial.
For example, ideally in this example you could use f5.6/40, f8/20, or any other combination shown on the dial. Obviously, you'll have to make some small adjustments to conform to the settings on your camera.
Notice that on the left side of the arrow "A 1/2" appears while "C 2X" appears on the right of the arrow. The first setting would give you 1/2 the indicated exposure. The second setting would give you 2X the indicated exposure. These settings are useful for either flat scenes or scenes with excessive contrast.
In the illustration you will see a "U" opposite .8 and an "O" opposite 100. You can use these settings as follows. For a scene that has a wide range of tones, first set the arrow to the light value of the darkest area in the scene. Then set the arrow to the light value indicated for the brightest area. Finally, set the arrow midway between the darkest and lightest values indicated by the meter and make your exposure based on the midway reading. 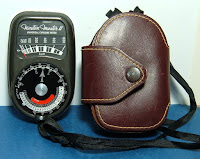 I was lucky enough to find meters that came with covers for both units. Although they add a bit of bulk to the meters, they are necessary if you want to keep your units in top condition. And as if that weren't enough, I even scored an instruction manual and a box for one of the units.
But I wasn't lucky enough to find a Weston Invercone, which is a device you can attach to the meter that allows you to take incident light readings as well as reflected light readings. Worse yet, Invercones are at least as scarce as winning lottery tickets. If you have one you no longer use, I'd love to hear from you.

hankpix
Octogenarian Hank Kellner is a retired educator/writer/freelance photographer whose current interest is collecting vintage 35mm rangefinder cameras. He is the author of several books and many articles that have appeared nationwide.